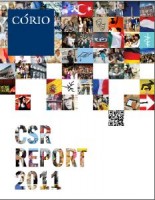 The report was edited by Media Wise. Corio operates shopping centres in prime locations in five countries in Europe plus Turkey.