The year 2015 got off to a good start for Media Wise, with an article in the Dutch financial daily Het Financiele Dagblad featuring advice on media interviews from Media Wise. The article was published on January 10, the Saturday edition, which has a readership of 185,000. 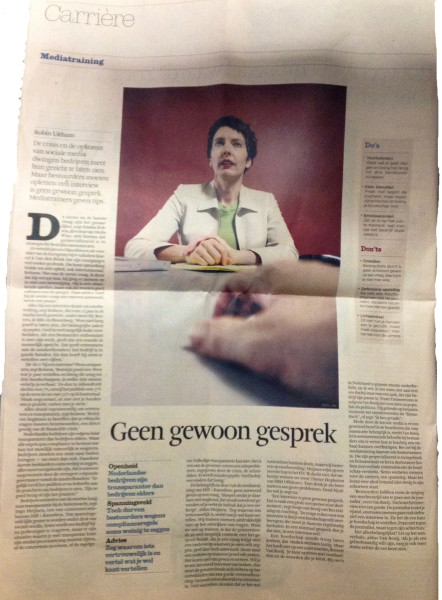 Companies have needed to show their face more in the wake of the financial crisis and the impact of social media is growing. Meaning that a media interview is no ordinary conversation, according to communication experts who provide media training. Tips for leaders.

The first and the last question is the most dangerous, says Emma Robson, Director of Media Wise. As (Jeroen) Dijsselbloem, Eurogroup P

resident, found out last year on the programme Knevel & Van den Brink, when he confirmed that his predecessor smoked a lot and drank. “It was the first question, I think he was surprised, he immediately went in with a confirmation. He is an excellent speaker, but he should practice well, in front of a mirror. Don’t rush to answer the first question. Pause and take your time.

Interviews are all about preparation. “Don’t be afriad to be yourself. Note down on paper in advance the important things you want to say. Give entertaining examples. If a a company director is enthusiastic about his work it tells us about the person he is. This gives shareholders confidence: the company is in good hands. He need not tell us anything about figures. ”

What you should do in an interview? Be relaxed, she says. “Be well prepared. Know what you’re going to tell and boil it down to three messages: which three sentences tell your story.” Of the impact you make, content counts for only 7 percent, voice for 37 percent and body language 55 percent body language. So make eye contact, do not touch your face,  vary your voice.

Today everything revolves around trust and transparency, says Robson. “Companies are realizing more that they have to answer ethical questions. This is a direct result of the financial crisis.” Dutch companies are more transparent than companies elsewhere, according to her. “But all the rules in terms of compliance in administration make it difficult to react naturally. Now, more than ever, companies need to make their voice heard outside. Which explains why company directors are often so guarded in what they say. Everthing needs to be pre-baked. This control aspect has increased enormously as a result of the stricter corporate governance requirements imposed by shareholders. At the same time the general public feels more of a need to see the faces of companies, to determine whether they are authentic leaders or a bunch of corporate fat cats.

Companies struggle with the huge demand for transparency in the outside world, says Ingo Heijnen, CEO of Hill + Knowlton. “This tension seems to be greater due to the pressure of social media. Sometimes a company is almost forced to respond but there are situations where you can not be as the transparency processes still need to mature, the competitor is reading it, or the regulator. Complete transparency is not possible. It is one of the biggest communication problems, motivated by the crisis, the scandals. There is less tolerance. Many companies find it difficult. ”

The major media don’t: not answering a question. “Simply because you won’t get away with it. It can be jarring if you give the impression that you’re hiding something. Say why something is confidential, tell them what you can tell. We train people explicitly not dodging questions.

We train people to take as much control as they can over the conversation. If you get a question on a topic that you don’t want to dicuss, don’t give an answer. Introduce a topic that you do want to discuss. It is a game of give and take.If you want to make the interview a success then the interviewee must establish a good basis of understanding. Never go into an interview unprepared. Many executives think they can just wing it. We insist on preparation.’ Heijnen refers to a recent headline in this newspaper. ‘I did not think let’s give that little pig a wash,’ (Sietze Hepkema of SBM Offshore.) That’s asking for trouble. Think before you speak.’

“An interview is not just talk. This is often a big eye-opener for participants, “says Serge van Rooij of Bex training and coaching. “The only reason for an interview is that you want to convey a message that you must therefore repeat regularly. You don’t do that in a normal conversation, but in an interview you do. “A message that keeps coming back is something people find difficult. But it does not have to be boring. “You can vary with examples and the words you choose.

CEOs in the Netherlands often hide their emotions. You sometimes cannot see whether the CEO really stands by the business, that his business is his passion. According to Van Rooij it is no wonder that Frans Timmermans is such a popular politician. ‘At appropriate moments he uses emotional words such as fantastic or says he is touched by something.

Partly due to social media there is a growing notion in the boardroom that communication is important. There is a growing need among directors to know how to get their story across in a powerful way, Van Rooij notes. For that reason Bex uses actors in media trianings. They are specialised in vocal technicques and body language and teach participants how to strengthen the message using non-verbal communication. ‘Sometimes people wobble with tension in front of the camera. But it comes across as if they are literally not steady on their feet.’

The most important thing? Watch your non-verbal language , says Van Rooij. ‘If you want to be credible as a CEO you can also show more of the person behind the CEO.’ – Robin Uitham