Know how to ask the right questions in interviews

Blog HomePosted in Communications, Our Blog

Though we often find ourselves the subjects of interviews, sometimes the tables are turned and we find that we’re the ones doing the questioning. What’s the first-time interviewer to do? Though asking questions may seem as natural as chatting with a friend, there’s a true art to interviewing. If you don’t have the time to learn by trial-and-error, here are a few shortcuts to conducting a better interview. It all lies in knowing the right questions to ask, listening carefully and taking the opportunity to pose probing follow-up questions.

Prepare
As with all things, preparation is key. Have at least in your head a list of questions beforehand, and know what you’d like the interview to accomplish. Want a funny anecdote? A few facts and figures? Don’t expect the interviewee to be able to divine what you’re looking for. Never pass up an opportunity to learn from the pros. Watch news anchors – even comedian anchors such as John Stewart – for inspiration.

Disarm the target
Being a great interviewer isn’t all about tenacity or toughness. Sometimes you have to draw nervous subjects out of themselves, or gain the trust of someone who has reason to be suspicious. A simple, effective way to do this is to start with an easy question. It doesn’t even necessarily have to be about the interview’s stated topic. But what do we mean by ‘easy question’? A general and fairly open question about something universal, such as sports or the weather. These are classic examples of easy entry points that will put interviewees at ease. But don’t make it too open as the vastness of the freedom you thereby are offering the interviewee can appear intimidating, or be viewed as a potential trap. And don’t make it too personal.

The Four W’s
Though it may sound clichè, questions that begin with What, Why, Where, When and How nearly always get the best responses. As an excellent standby, try using “Why do you care about [topic]?” Asking about someone’s emotional investment can lead to rich, compelling answers.

This is not a multiple-choice test
Don’t ask closed questions – ones that limit the response that your subject can give. Think about the multiple-choice tests you got in school – and then do the opposite. Unless you’re aiming for a “gotcha” style interview, don’t try to put words in the interviewee’s mouth, such as: “I suppose you bought the car because you thought it was a good deal, right?”. These are sure to derail nervous interviewees, waste time, or lead to weak answers. If you don’t get a satisfactory answer, re-word the question and ask it later.

Don’t know? Don’t worry!
Be honest if you’re not familiar with a subject, or if you don’t understand something the interviewee says. Don’t be afraid to interrupt someone if you need clarification. It’s embarrassing and unproductive for both parties if you let the speaker talk endlessly and lose your attention or understanding the process. Just as people love to talk about themselves, they also love to talk about their area of expertise but should be made aware of the need to stick to the point in their story.

Do sneak in questions when they’re not expected
Don’t forget to throw in follow-up questions when appropriate and do sneak in questions after the interview is over. These aren’t necessarily trick questions, but a clever way to catch the subject feeling more honest and open when they think the “official” part is done. These questions will produce less rehearsed answers, which often lend themselves much better to headlines, pull-out quotes and in the case of radio and television, catchy soundbites.

For more information on our interview training courses, contact us at info@mediawise.local 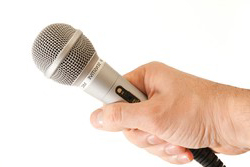