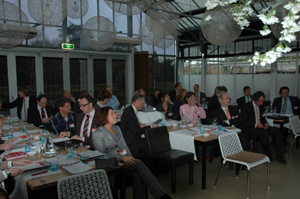 Océ is one of the world’s leading providers of document management and printing for professionals. The broad Océ offering includes office printing and copying systems, high speed digital production printers and wide format printing systems. Océ is also a foremost supplier of document management outsourcing. With headquarters in Venlo, The Netherlands, Océ is active in approximately 100 countries and employs some 22,000 people worldwide.

Media Wise was asked to prepare and organise Océ’s third annual multi-stakeholder engagement dialogue. This included mapping current stakeholders, creating an on-line survey of Océ’s sustainability policy, the overall branding of the event, preparing and presenting survey results at the event and all logistical legwork.

After researching the company and holding consultations with Océ sustainability and communications representatives, Media Wise identified new stakeholders who could participate in the event. We then examined Océ’s CSR strategy, pillars and targets in order to devise a user-friendly and succinct survey, the results of which would steer the stakeholder dialogue.

The online survey contained a general section to be answered by all stakeholders and then guided each stakeholder to their tailored section depending on whether they were a customer, supplier/partner, employee, investor, local authority/NGO/Academia. From the responses of the survey, Media Wise was able to suggest topics of discussion for the dialogue and understood which areas respondents felt Océ was either strong or weak in. We thus developed the agenda for the day to include presentations by Océ stakeholders of their best practices in CSR and working groups around material topics that stakeholders said Océ needed to look at in depth.

Media Wise also selected the venue, one that was in harmony with the theme of transparency. The event took place in a historical greenhouse that has been converted into a restaurant with excellent organic and locally sourced food.

All of the participants agreed that it was a very good event and said they would continue to participate in the dialogue in the future. One participant called the event “Inspiring, informative, reflective and open.”